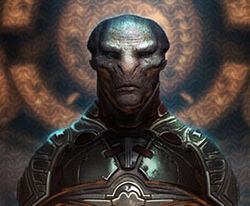 The Beta also known as the Morra were a spacefairing humanoid race native to Ecosystem Psi.

The Beta was nearly wiped out by a mysterious foe known as "The Silent Ones" before their arrival on Ecosystem 09. Built from the scraps of their last starship, the Beta colony on Ecosystem 09 is born out of necessity. Once a thriving culture, everything they craft is to defend their society from the chaos that threatens to consume it. The Beta rely on their Skycranes to transport supplies and construct their outposts.

Once a space faring culture, the Beta sought to explore the stars seeking to expand their knowledge and civilization. This inevitably brought them into conflict with the unknown race knowing at "The Silent Ones", who had already consumed entire planets. Despite the struggle and inferior technology the Beta fought against "The Silent Ones" in one bloody war after another, losing ground with each struggle and nearly wiping out their entire culture.

Forced to retreat, the Beta took the remainder of their starships and fled to the darkness of space seeking refuge in the stars, coming across a signal that eventually faded. This signal was likely a remaining signal from The Human's space exploration program, which inevitably led them to the planet dubbed Ecosystem 09. Giving up their space capabilities the Beta sought to rebuild their once glorious civilization on Ecosystem 09 by gathering resources and hoping they would not be noticed by any in the galaxy a second time, while others hoped that they may soon take a dominant role in the galaxy. This proved to be a far-fetched dream as their efforts would inevitably bring them into contact once again with the Humans, and the terryfing Grey Goo...

After many generations of fleeing from the Silent Ones, the escaping fleet was reduced to one starship. The starship later arrived on Ecosystem 09. Sacrificing the starship, the survivors, now called the Tilmun Astin, built a colony on the planet and began utilizing the ample resources, notably catalyst, in hopes of returning to space.

The Beta on Ecosystem 09 are governed by The Council.

Usandu is the spoken language of the Beta.

The Beta's military force value mobility. Vehicles are expertly piloted by individual soldiers, but they are only as powerful as the hand of their commander. A skilled leader can construct multiple outposts in resource-rich or easily defensible locations to gain an advantage on the battlefield.

Retrieved from "https://grey-goo.fandom.com/wiki/Beta?oldid=6753"
Community content is available under CC-BY-SA unless otherwise noted.