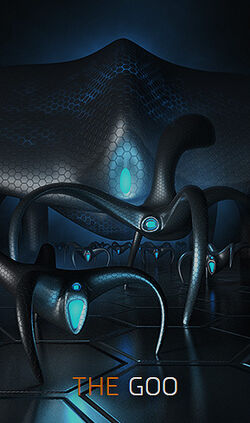 Goo is a consolidation of microscopic machines or nanites, that replicate themselves and can mold into any form they wish or are ordered to.

Originally engineered in the late 21st century as an exploration tool, the Goo was the key to unlocking Humanity’s passage outside of the Solar System. Able to access the inaccessible, it revealed the Galaxy’s secrets and charted traversable paths stretching across the Milky Way.

As the undiscovered became discovered, and the unknown disappeared, the Goo had fulfilled its purpose and was ceased...or so it was thought.

More than a century has since passed, and the Goo has returned from the last remaining darkness of the Galaxy. It has altered, evolved, and is set on a path of destruction leading back to its creator.

The Goo was originally created by humans. Called "the Von Neumann probe", the Goo was created to carry out the Pathfinder Project. Due to its size, it was able to pass through the Keyhole and remain intact, replicating itself on the other side using found resources.

The Goo carried out the Pathfinder Project, even after its human creators stopped listening to it. At some point in time between then and the events in Grey Goo, the Goo identified the presence of the Silent Ones, which they call "The Silence".

The Goo's transition from docile human exploration probe to hive-minded war machine is never fully explained, but it seems that its original programming to search out life in the galaxy, and its adaptive nature, led it to the conclusion that it had to fight the Silent Ones, because if they were not stopped, all of the discovered and yet undiscovered organisms would be destroyed, which would respectively invalidate their past research and remove their purpose. It is also possible that the Silent Ones included the Goo in their apparent extermination campaign, and the Goo was forced to defend itself.

After the supposed destruction by the Human/Beta alliance, in a last desperate move Goo AI Prime 01.02 absorbed Singleton into the Goo. Surprisingly he was able to survive the consumption that befalls most victims and became a part of the Goo. In their campaign, they discovered something far more distressing than what the Humans/Beta had believed: the Silent Ones slowly advancing towards the ecosystems.

When they were shut down, most went dormant. But, the few that remained kept exploring until they found the Silent Ones. The reason they changed their objective was because they need to expand enough to defeat the Shroud who want to destroy the galaxy.

Retrieved from "https://grey-goo.fandom.com/wiki/Goo?oldid=6728"
Community content is available under CC-BY-SA unless otherwise noted.