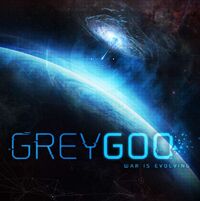 THE FACE OF WAR IS CHANGING.

Five centuries after humans first left earth, three factions fight to control the lifeblood of a rocky oasis: Ecosystem Nine. It is a world of chaos. Survival depends on the ability to grow, fight—and to evolve.

As commander to one of three factions, your goal is simple: to wage war. To forge machines of battle from catalyst, Nine’s powerful resource—because whoever attains the largest supply has the tightest grip on the future

Retrieved from "https://grey-goo.fandom.com/wiki/Grey_Goo_Wiki?oldid=4111"
Community content is available under CC-BY-SA unless otherwise noted.