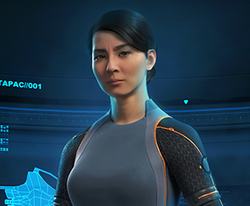 Humans once explored space visiting many different planets across the galaxy. After discovering nothing, they returned to Earth believing they were alone. After a signal detected at Ecosystem Nine, humans set off with their machines of war to claim their place in the greater galaxy.

In the process of decommissioning their instruments of war, mankind concludes that the most deadly instruments are themselves. War is a product of human nature. They fully pull themselves above the decision-making loop, relegating the majority of action to their AI constructs. Until the signal arrives that reminds them of their past.

With only an academic knowledge of warfare, and access to the greatest technology in creation, the Human expedition on Nine must resurrect their old instruments of war and return themselves to the seat of command; for their own survival, and potentially the survival of all life in the Galaxy.

The Human civilization depicted in Grey Goo seems to reflect our own, but projecting events that take place many years in the future.

At some point in the 21st century, Humanity created a series of artificially intelligent androids called Valiants, which led to constant, brutal conflict. At some point shortly after the 21st Century, Humanity detected a miniscule wormhole in the Solar System through which they could partially see into another area of the galaxy. A self-replicating probe system made up of nanites called Pathfinder - known colloquially as 'the Goo' - was created and sent through this 'Keyhole' in order to map the galaxy and search for intelligent life. Although it found numerous habitable planets carrying life-forms, the Pathfinder Project did not detect any form of intelligence and it was assumed that the probe system eventually shut down.

After centuries of pointless infighting and the seeming absence of other intelligent life in the universe, humans tired of their condition, withdrawing to Earth, where they enacted the Armistice, a treaty to end all treaties that put a permanent stop to the constant wars that had plagued them for so long.

Human civilization advanced into an age of utter perfection, using their technology to create artificial intelligences that assisted in maintaining a conflict-less utopia.

500 years after first venturing out of the solar system, Humanity detected a signal coming from the planet that the Pathfinder Program had declared devoid of intelligent life, designated Ecosystem 09 in the Crux Arm. The first extra-solar expedition since the Armistice was launched with the starship Darwin under the command of Lucy Tak. Upon arriving at Ecosystem 09, drone based expeditions to the surface made contact with an intelligent species who showed extreme hostility to the newcomers, forcing the Humans to alter their scientific drones into war machines in order to defend themselves. Analysis of the alien technology found their comm signals to be similar in nature to that of a signal detected centuries ago by Pathfinder and labelled as "the Beta candidate for intelligent life" - however, when Pathfinder reached the planet they found it devoid of any kind of intelligence. Human drone forces suffered heavy losses from the Beta, culminating in the capture of one of the Darwin's only Human crew members, Specialist John Redgrave.

The Humans had collected multiple samples from Ecosystem 09's surface including a strange metallic substance that showed a degree of intelligence. Under analysis this metallic substance was nearly identical in nature to the Goo created by the Humans centuries ago but far more agressive and violent. It was speculated that the Beta may have tampered with the Goo in some way, turning a peaceful self-replicating probe system into a murderous army. These samples escaped containment and caused the destruction of the Darwin, stranding the human forces on the planet. Commander Tak rallied her forces together, eschewing the chance of diplomacy in favour of force, and rescued the Valiant Singleton and Redgrave from the Beta, capturing the Beta commander Saruk in the process.

It became apparent that the Beta did not possess the technological skill necessary to alter the Goo into what they are now, leading to Lucy seeking an alliance with the Beta in order to face a common enemy. Human drones and the Beta army fought side by side and won a number of key victories against the Goo. Eventually the only remaining Goo masses were those feeding on the Beta's catalyst stockpile at the Terminal. Singleton volunteered to detonate the catalyst stores in order to destroy the last Goo on the planet despite the fact that it was a suicide mission. Redgrave and Singleton assaulted the main structure while Lucy's drones and Saruk's forces provided a diversion. The Human-Beta alliance was victorious but Singleton was lost.

Despite Singleton's sacrifice, the Goo managed to evade extinction and launched a devastating counter-attack. The Human-Beta alliance was pushed back on all fronts and the Human command AI M.U.M. was infilitrated by the Goo, causing significant damage to it. Eventually Human-Beta forces were pushed back to the Beta's Aperture Device, a Keyhole opening system that could allow the Goo to leave Ecosystem 09 to potentially attack other planets including Earth or call for reinforcements. At this point it was revealed that the Goo was now being aided by the surviving consciousness of Singleton, who had been absorbed into their hivemind and somehow retained his personality. He attempted to convince Commander Tak of an even greater threat than the Goo but Lucy refused to listen to what could be an attempt at psychological warfare by her enemy. Despite the combined efforts of the Humans and Beta their forces were defeated. Curiously, the Goo did not attempt to harm Lucy or Saruk and the two managed to escape. The Humans and Beta watched in horror as the Goo opened Keyholes across the planet and brought countless Goo masses to Ecosystem 09.

While human technology is technically advanced well beyond the Betas and even arguably the Goo itself, human military capabilities are comparatively weak considering how advanced humans are. Because of the Armistice, and a perceived isolation from outside attack, standing militaries and even personal weapons have become artifacts of an uncivilized and reviled era.

As such the human military is not explicitly reflective of the vastly advanced technology behind it. Their current forces consist of what could be assembled from existing technology, with very few advanced weapons being available to them.

All human units are unmanned drones with the exception of the Core, which has a physically present human being overseeing it and all its assigned forces.

Retrieved from "https://grey-goo.fandom.com/wiki/Humans?oldid=6741"
Community content is available under CC-BY-SA unless otherwise noted.