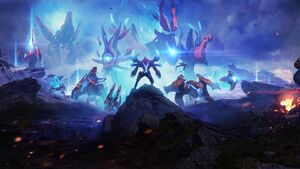 The Shroud, also known as the "The Silent Ones" by the Beta, are an enigmatic race that was responsible for the destruction of the Beta society, as well as possibly many other worlds with life.

Retrieved from "https://grey-goo.fandom.com/wiki/Shroud?oldid=6847"
Community content is available under CC-BY-SA unless otherwise noted.