The Grey Goo Wiki is an unofficial collaborative encyclopedia project about the Grey Goo real-time strategy video game developed by Petroglyph Games and published by Grey Box. The game was released on January 23, 2015. 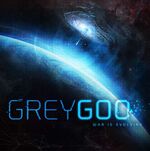 Grey Goo is a real-time strategy game (RTS for short) with roots in classic strategy mechanics. Five centuries after humans first left Earth, three factions fight to control the lifeblood of a rocky oasis: Ecosystem Nine. It is a world of chaos. Survival depends on the ability to grow, fight—and to evolve. As commander to one of three factions, the adaptive Beta, the impervious humans, or the unpredictable Goo, your goal is simple: to wage war. To forge machines of battle from catalyst, Nine’s powerful resource—because whoever attains the largest supply has the tightest grip on the future.

Retrieved from "https://grey-goo.fandom.com/wiki/Template:Wikiportal:Main/About?oldid=6247"
Community content is available under CC-BY-SA unless otherwise noted.